A crossover of GoFundMe and Kickstarter. 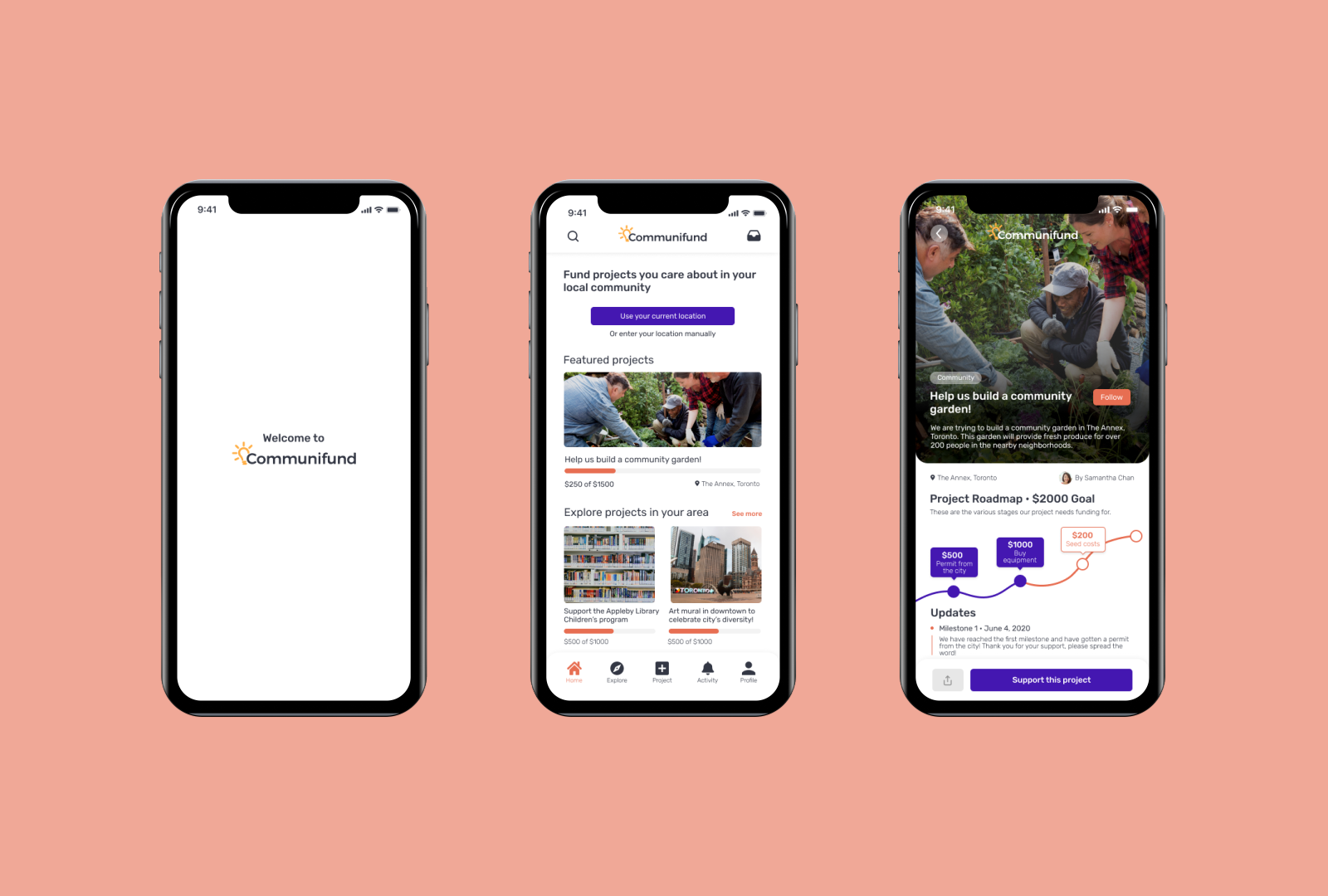 Communifund is a mobile app that is inspired by the events of the ongoing COVID-19 pandemic. A crossover of GoFundMe and Kickstarter, its aim is to help support local projects in a city's community or neighbourhood.

Places around the world have been severely affected by this deadly virus. Due to the ramifications that COVID-19 has caused to millions of people, the need for urgent aid, relief efforts, and community support is important now more than ever.

Current crowdfunding apps are created with one sole purpose - to simply, donate to a project or cause.

That seems counterintuitive as to what community is and what it stands for, as it should actually be prolonging support throughout all stages of a project, and even after once a project has ended. Especially with COVID-19 right now, no one knows when this virus will die down - since it is such a new and unfamiliar disease, times are constantly and rapidly evolving each day.

To add on, current crowdfunding apps provide only general outlines of a project that has been created; there is no streamlining method for donors to see the path of their money.

Such apps don't utilize the relationship between the beneficiary (creator) and benefactor (donor) in a transparent, incentivized, and overall better way. How can we integrate an effective process towards promoting a visible roadmap on community-focused projects?

To provide localized project creators and donors with a digital platform to crowdfund community building projects.

These kinds of projects will help improve the bonds between people in a city, where they will provide an accessible resource for donors to view.

Donors need to feel enticed and engaged to donate to community projects and causes. We plan to create a transparent crowdfunding platform that takes the donor on a journey to see where their money goes into creating and supporting community projects.

This raises some of the following concerns:

Extensive user research was conducted for Communifund, as the topic of crowdfunding happens to be a very niche one. We started off by doing:

To start off, we analyzed 3 popular apps - GoFundMe, Kickstarter, and Patreon.

The most popular online crowdfunding platform. Individuals, groups, and organizations can all use this app for fundraising purposes. While it allows for easy and flexible customizations towards user-created campaigns, in addition to having no fees and 24/7 customer service, only 1 out of 10 campaigns only ever get funded on GoFundMe. 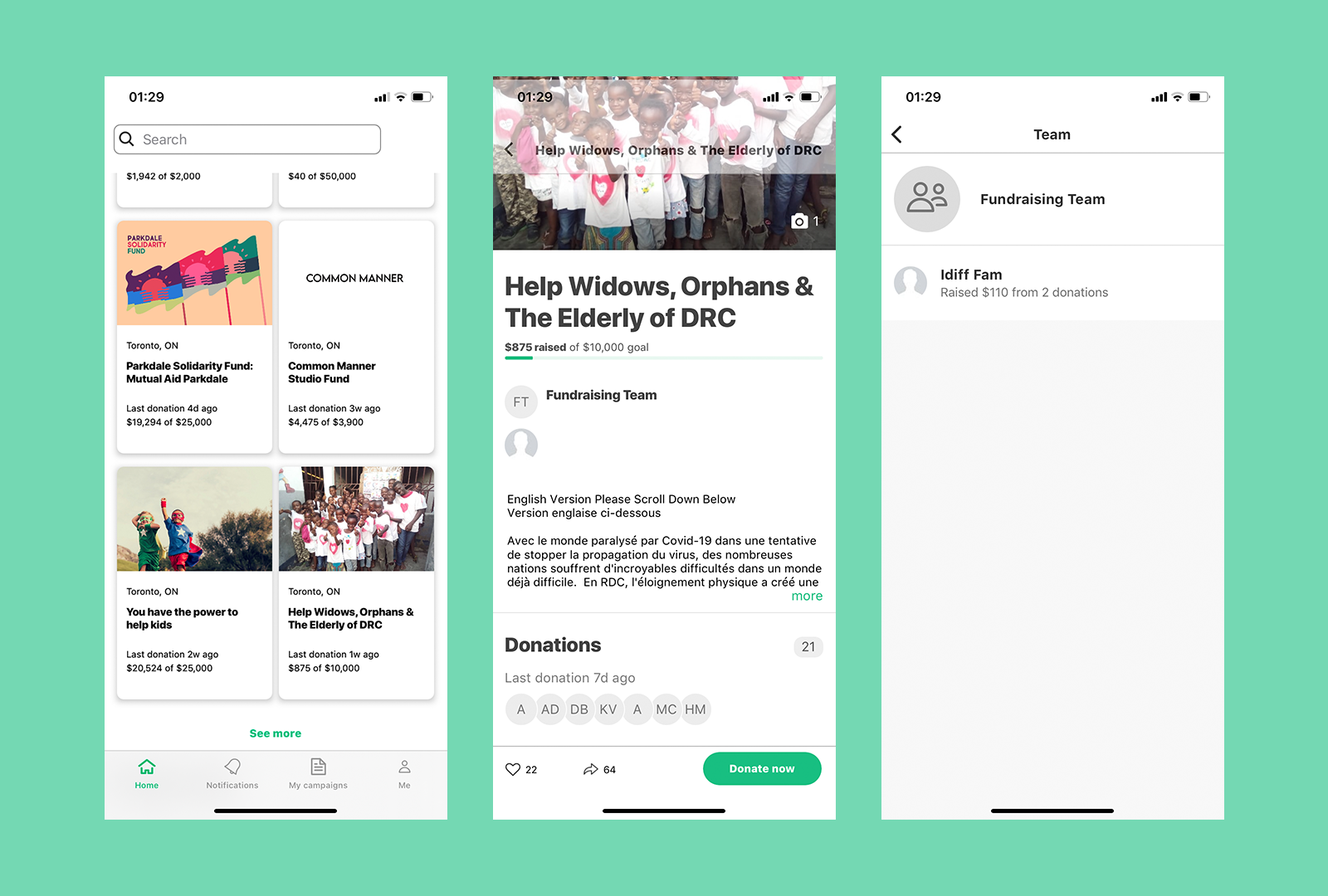 User flow of a featured project on the GoFundMe homepage. The selected project, "Help Widows, Orphans & The Elderly of DRC", was created on May 9, 2020, and as of September 17, 2020, it has only raised $875 out of its $10,000 goal. Its last donation was made 1 week ago. Upon viewing the Fundraising Team, it only displays its team members, and their profiles are inaccessible if a user was trying to click on their name.

Just like GoFundMe, Kickstarter users create projects that can be fundraised. Their focus is more centered around creative efforts and their business model of arts patronage - hence when donors back Kickstarter projects, they are offered tangible rewards (eg. material items such as gift cards or money) or experiences, in exchange for their donations.

Funding on Kickstart is all-or-nothing. That means if your project doesn't meet its expected goal by the given timeline, you won't receive any of the funds that were donated to your project. This has been the subject of controversy, as seen in this example below of a 2015 Techcrunch article. 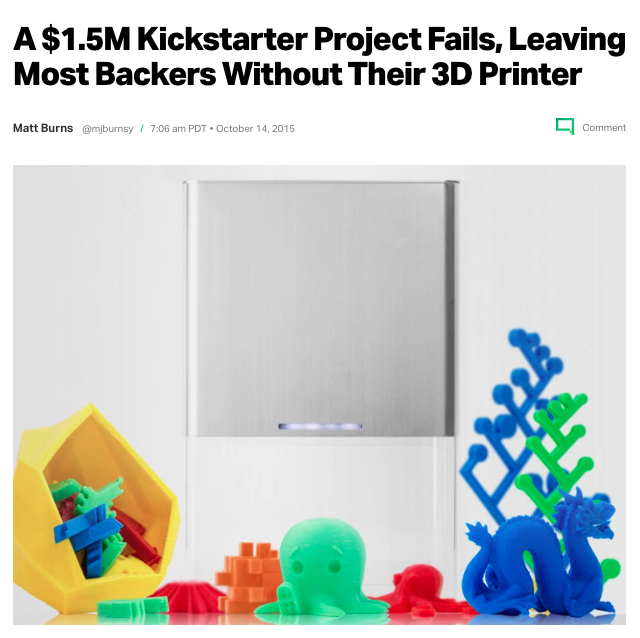 As a result of what was supposed to be a very promising, but failed $1.5 million Kickstarter project, many of its backers were left without a refund.

Acts as a subscription-based model. Users, known as Patreons, regularly contribute a set amount of money every month or per creation; this allows creators to build a relationship with their fans, making it easier to deliver exclusive content to their subscribers as an incentive to continue funding them. However, Patreon's marketing efforts towards its own userbase are weak in which entire verticals on their homepage are only dedicated to projects (and not the creators themselves) that you must follow and subscribe in order so you can gain access to view. 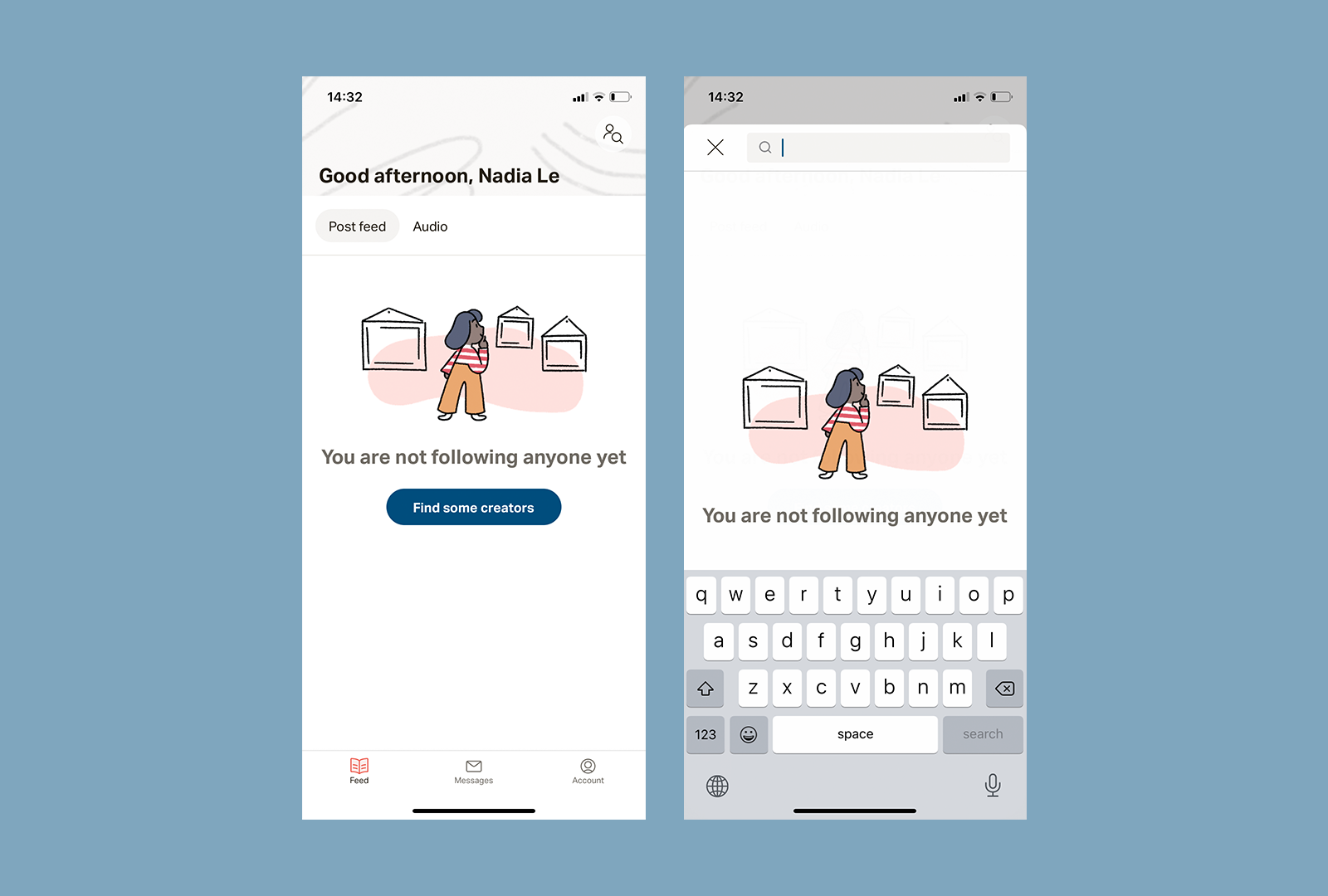 User flow of the Patreon app. Featured projects of creators aren't shown in the homepage upon signing up, you have to find creators yourself in order to follow them. For new users of this platform, it is likely they don't know any creators they wish to follow and are unsure where to look, as the search function doesn't list any categories or filters.

We garnered 43 responses from a survey that was sent out from Typeform. Our findings showed...

We interviewed 3 participants to get a better, in-depth understanding of the problems they faced in crowdfunding apps.

After our surveys and interviews, we compiled all of our data into documents that would contain a user's persona and their given journey map. With the journey map, they help to paint a better picture of how we want the eventual user experience of Communifund to look like. 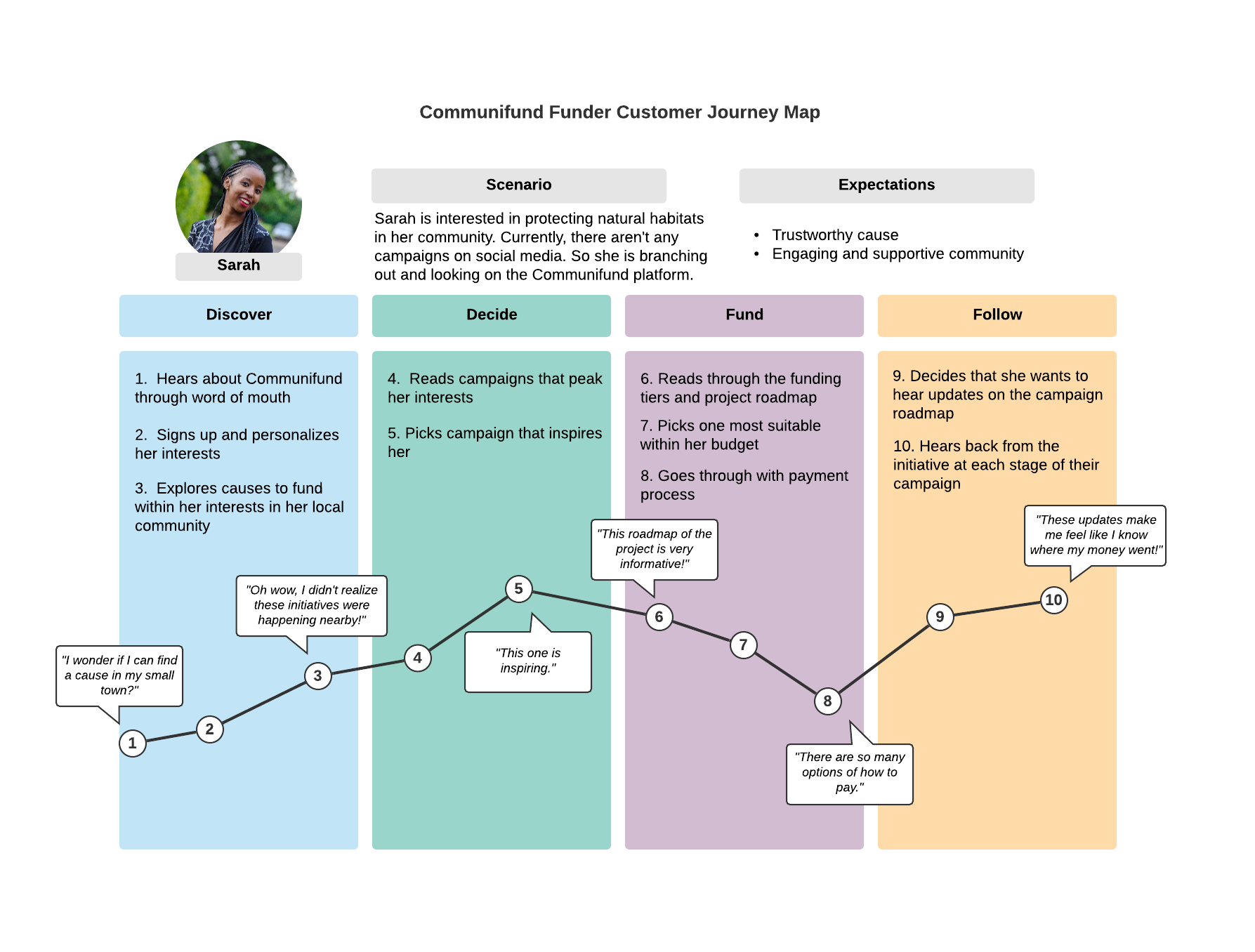 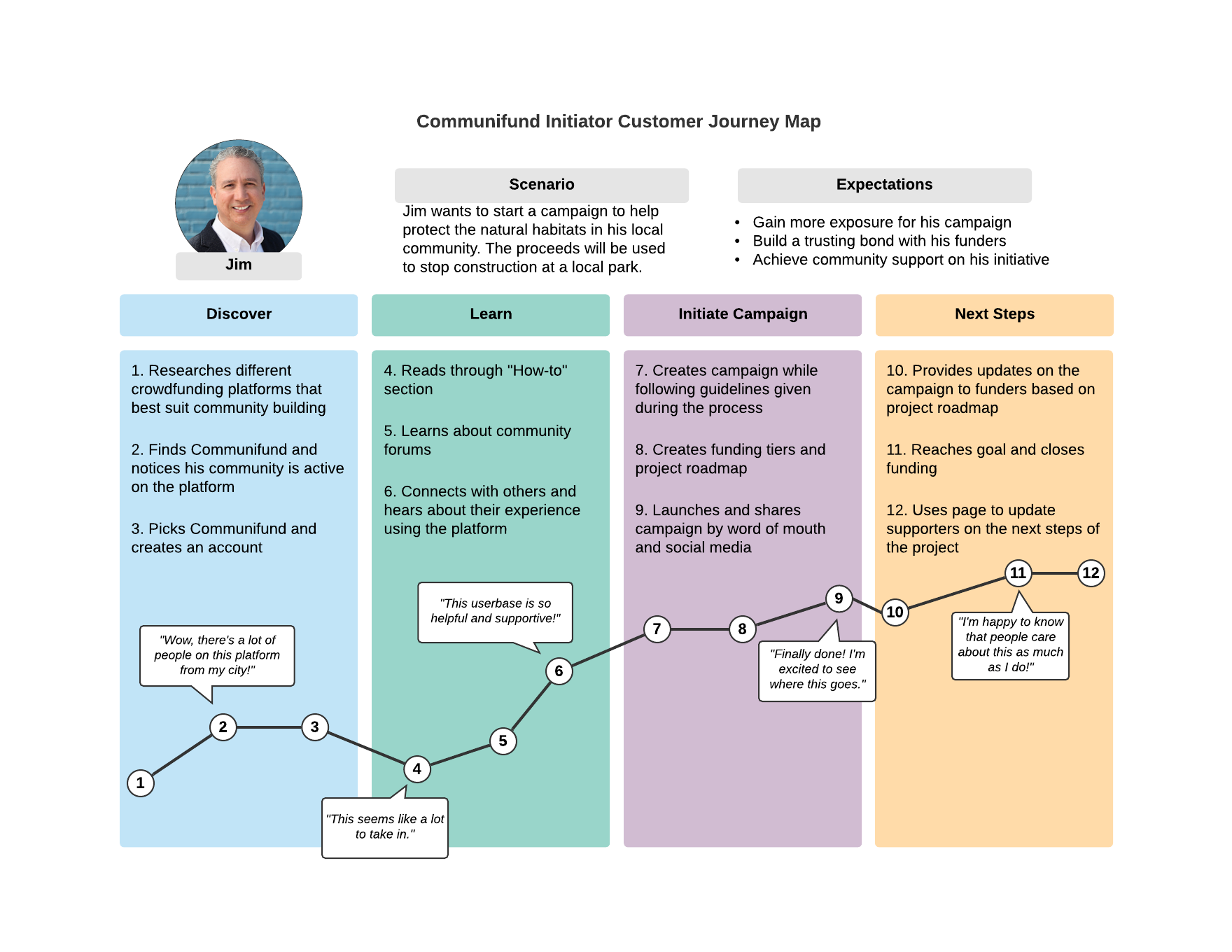 In the last step of our user research, an information architecture (IA) chart was created to map out the ideal user experience flow of Communifund.

From our IA chart, our benchmark findings entailed:

During the wireframing stage, constant iterations were being done - we sat down with our mentor, Himesh Patel, every Friday afternoons regarding so. This helped to better envision what the Communifund app would look like, especially once we would reach the high-fidelity mockup stage. 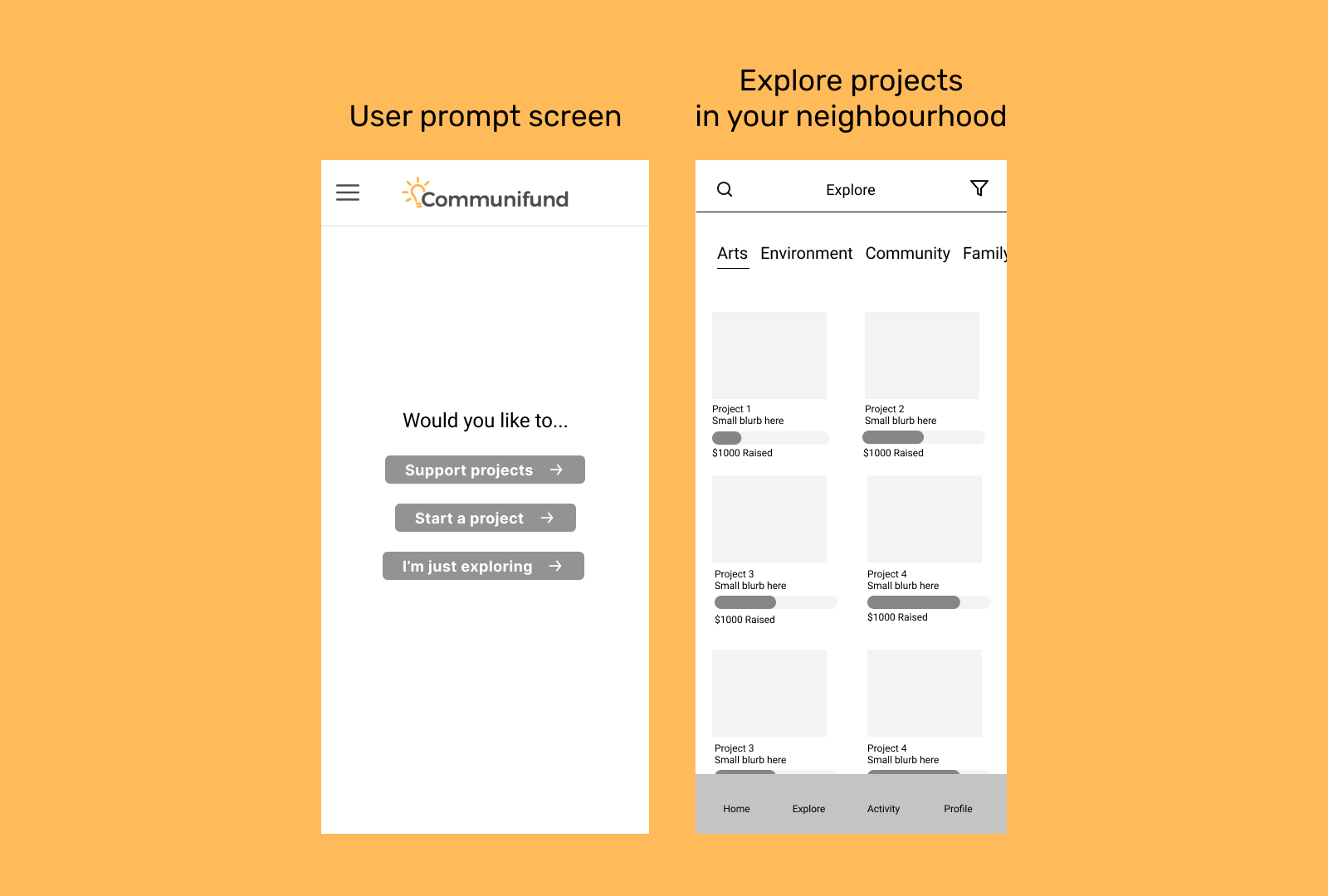 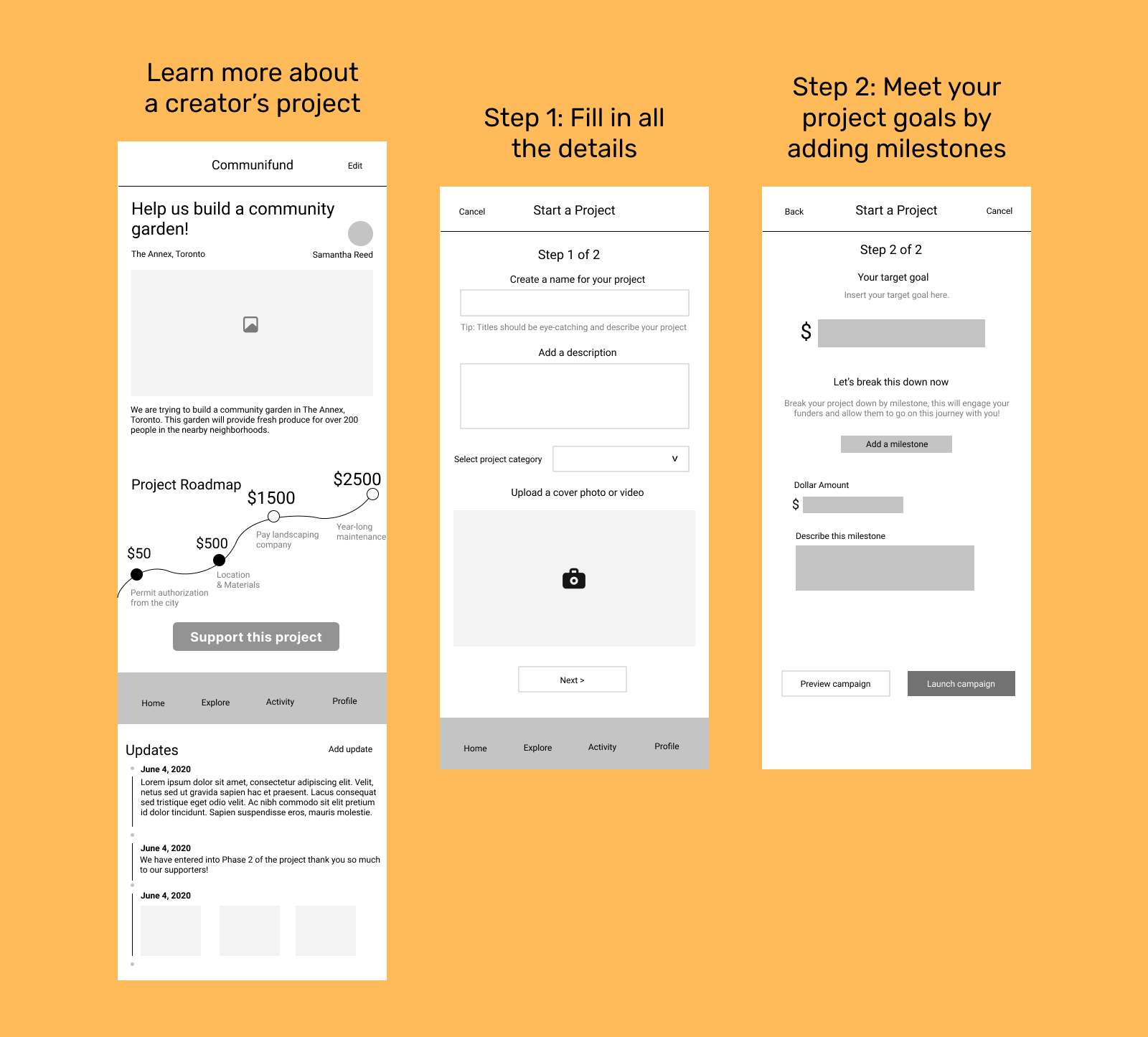 After finalizing the details of our low-fidelity wireframes, we prepared ourselves for the next stage of our project - usability testing. We spent a week and half with 6 participants to test our app, as if they were interacting with what would be the "real" version of Communifund.

Our findings showed that: 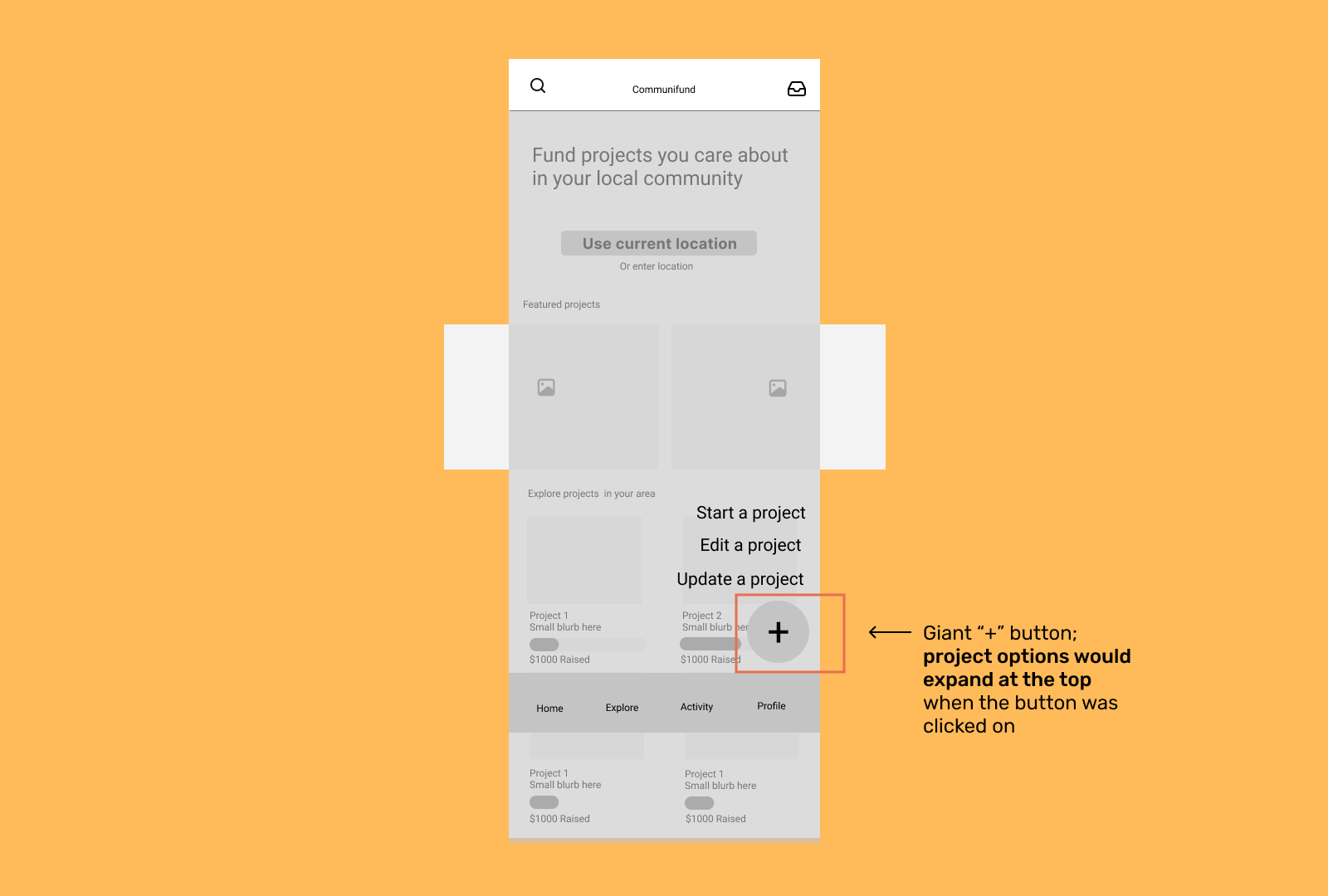 1) Self-awareness in designing for both iPhone and Android.

As we were designing Communifund for it to be used on any mobile device, be it iPhone or Android, the functionalities we incorporated had to be compatible for both devices. As mentioned during our user testing, we had a huge “+” button at the bottom right in our wireframe, and if you would click on it, it will give you the options to create, edit, and update your project. However, the + button is only specific to Android devices, as seen in Google Material Design guidelines.

After user testing, the both of us were required to briefly read the iOS Human Interface and Google Material Design guidelines to understand best practices for designing mobile apps better, as well as determining which functionalities were specific to which platform only.

Maintaining consistency in all aspects and disciplines of design is key to producing a great app. There are some instances though, where you can't replace "Skip" with an icon, or replace the "Inbox" button with a word. Use your best judgment when adding in these components.

3) Working in the infamous slope.

Perhaps one of our most discussed features, the purpose of the Projects slope in Communifund is to illustrate a project’s progress through its milestones the creator adds in.

It’s a cool feature. But it’s also stark, unconventional, and even challenging when we added it in. You usually see slopes or graphs in financial apps, and obviously, Communifund isn’t one of that kind. How could we make sure that our users would be fully able to understand the slope when using our app?

Labelling is detrimental, and it took us a while before it finally dawned to us that the best user experiences are not only visual, but are also explanatory through words. Interactivity is key too - this is seen when you tap on a point on the slope. The milestone labels pop up during the interactivity portion of the slope.

4) Even though we designed low-fi wireframes, our end result may not be reflective from the very beginning.

Constant iterations were being done, even through after user testing and towards the end of the final prototype. Design is a rapidly evolving field that must be kept up with; it is very easy to fall behind quickly.

For both Hossai and myself, this was our first time really digging deep into a product design side project. We learned so much all throughout Summer 2020 by incorporating so many UX research methods, really getting our design thinking juices flowing, and not to mention, the constant Google Hangouts meetings we attended and Slack messages we sent to each other.

To add on, because we were a 2-person team (Himesh only played a mentor role for Communifund), it felt like we did so much work that normally you would assign tasks to in a large design department in a corporate company. We improved our skills in UX research, UX writing, wireframing & prototyping, visual design, component libraries, and even project management.

If we had to do Communifund all over again, the both of us were pondering more towards the project owner or business side of things. For instance, adding more contextual features would have been a huge help, such as integrating Google Maps when you turned on your location, or Paypal integration when donating to a project. This would have improved our UX and would have made Communifund more of a realistic app to use, as if was a fully functional app you would download from the App Store.

Lastly, adding on to our component library, and even creating a design system would have expanded our visual design knowledge too. The both of us will be working towards that goal in the months to come. I will be working on my next side project, which will be a hypothetical design system for MLSE Digital Labs (not affiliated with the organization). As for Hossai, she will be working a UX design Co-Op at Ontario Digital Service this Fall 2020.