Get involved with the largest social club on campus! 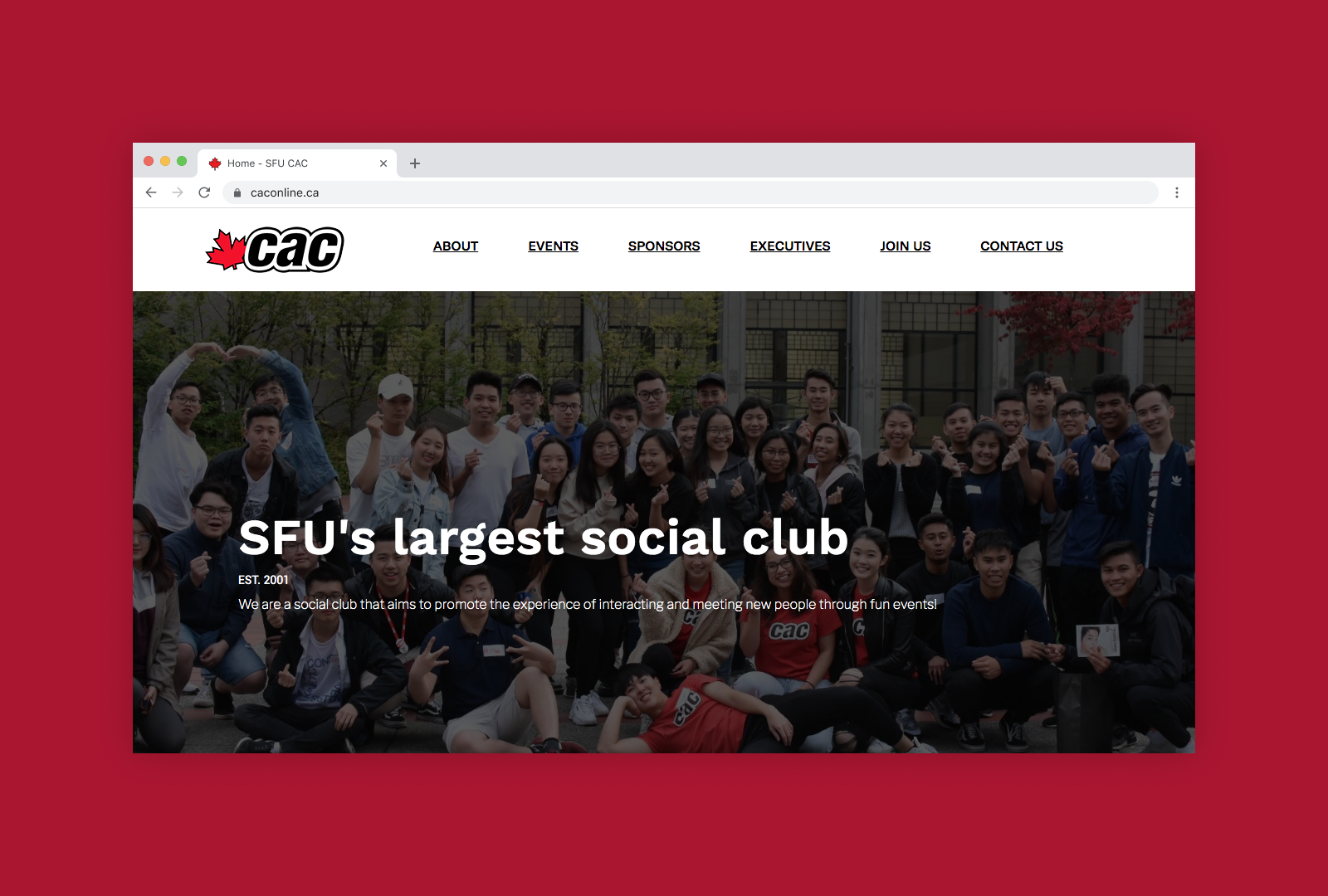 Screenshot of SFU CAC at www.caconline.ca. Unfortunately, due to domain cyberquatting, the website is now defunct.

The SFU Canadianized Asian Club, or SFU CAC for short, was founded in 2001 by Lynden Wei, a Canadianized Asian himself. Back then, the clubs at SFU catered to either international students, or they didn’t allow Asians to join, because they thought that Asian students at SFU weren’t good enough to join or participate in. Therefore, Wei wanted a club that fit the needs, wants, and interests of his desired student body, as well as an organization that was similar to UBC CVC, or the Chinese Varsity Club. He posted an ad on The Peak, SFU's student newspaper - "Calling all 'Canadianized Asians' to Meet!", and that's how the club began!

Even though SFU CAC brands itself as indeed, "The largest social club on campus", its presence online was there, but there could be more potential added to it.

Therefore, I made it a goal in the beginning of the 2018-2019 school year to take initiative and do something in regards to its existence in cyberspace. When I saw that CAC already had a website in the world-wide-web, I immediately knew this was a project I could see myself doing.

1) The old website was outdated, both through a visual and navigational means.

The last time I heard that our website got a total makeover was sometime in 2013 or 2014. It is no doubt that design trends do come and go. The old website may have served the needs of CAC's members during those years, but with the rapid rise of online and digital media over the past several years, one has to constantly be updated with the current landscape of design, user experience, and anything that has to do with new media.

A preview of the old website, found on web.archive.org. Prior to starting this project, the last minor changes made on this version of www.caconline.ca was done in February 2018.

2) Much of the information that potential or existing members of CAC wanted to know about, couldn't be found online.

As a current executive member, one of our goals in the club is to get SFU students to come out to our events, be a part of a huge family away from home, and becoming the first to know about all of the latest perks, deals, and the 411 that is going on in campus! Surprisingly, none of that can be found through our website.

3) Emphasizing on the lack of a presence online.

As mentioned, CAC is online, through their website and social media. New members are able to join the club through SFU Clubs Day or through our table booths throughout the semester, but what if a student couldn't make it to campus, otherwise? You can't purchase a membership through social media, because social media wasn't designed for those actions (although as of recently, Facebook and Instagram have both added "Call-to-Action" buttons for business pages, but those buttons will redirect you to a designated website anyway).

In a 2018 study by the Canadian Internet Registration Authority (CIRA), 86% of Canadians have a broadband internet connection at home. 52% of Canadians have five or more Internet connected devices - some of them being laptop at 55%, tablets at 12%, and smartphones at 32%. If you aren't online, you're already behind on what's happening in the world in which we live in.

All of the aforementioned pain points, would then turn into goals I hoped to accomplish for the new website.

The UBC Chinese Varsity Club, commonly known as UBC CVC, is one of the largest and oldest social clubs at the University of British Columbia, with over 1,200 members, led by approximately 100 executive members.

Its history can be traced back to the 1930s by several Chinese-Canadian students who attended UBC. They were excluded from participating in varsity athletics, which prompted them to create a club on campus where fellow UBC students of Asian descent could also enjoy sports on campus.

Although CVC retains its name, due to its origins and legacy, it has today since grown into a club that is open to all ethnicities and cultures. Throughout the school year, CVC hosts two to four small and large-scale events per month, ranging from dinner and improv shows, workshops, and of course, athletic tournaments. 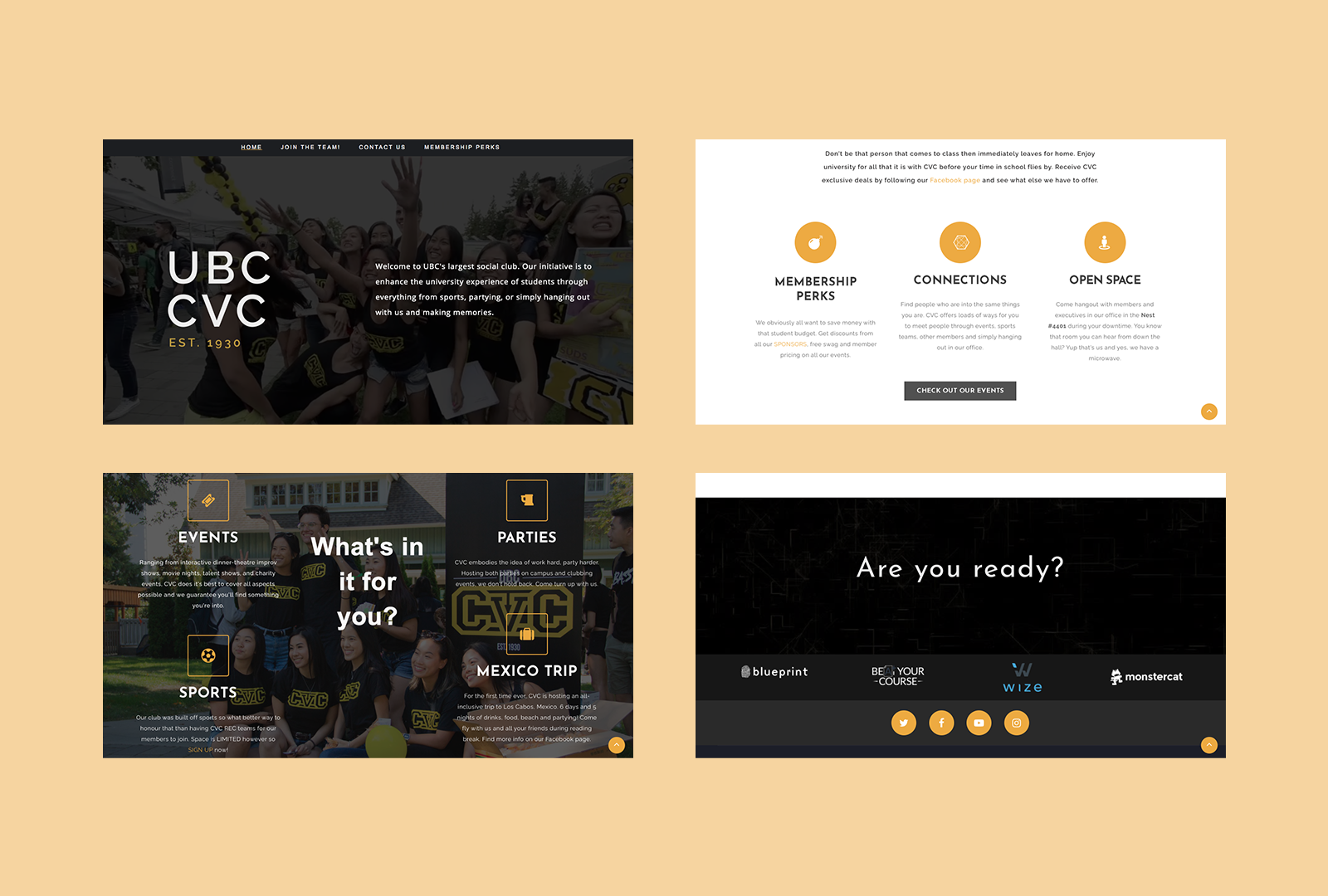 UBC CVC homepage. Screenshots are aligned in a Z-pattern. 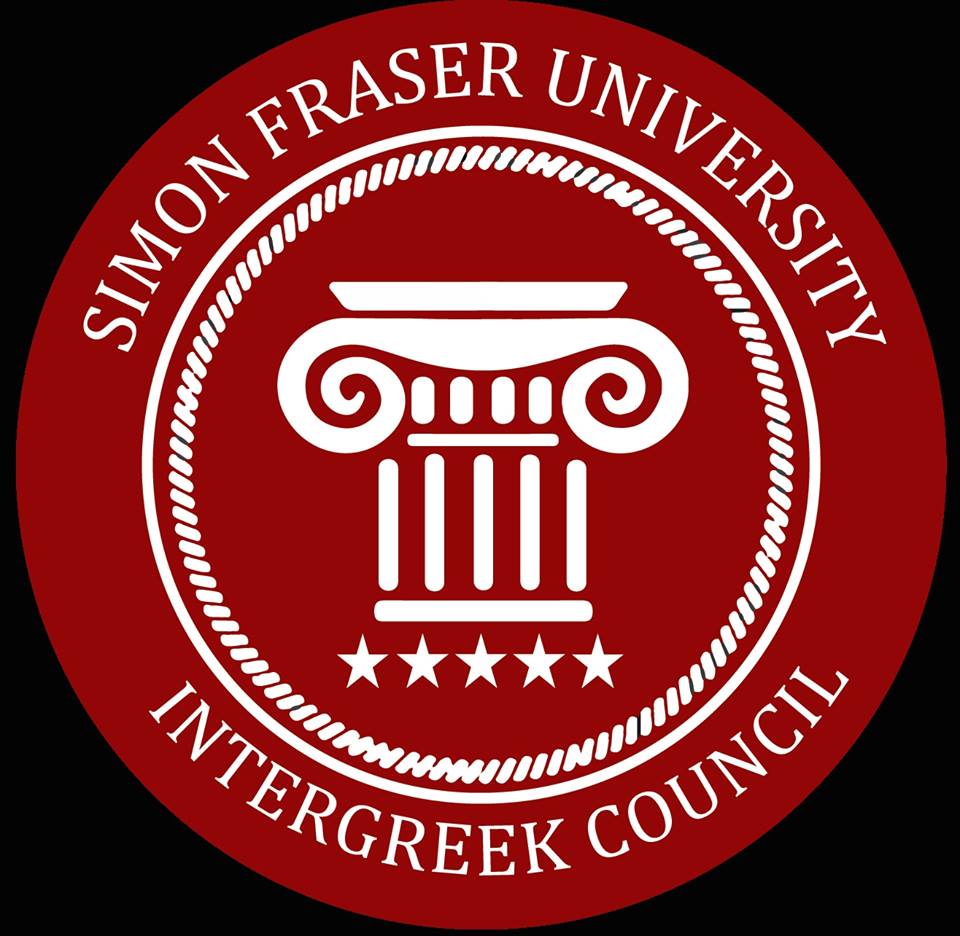 Although not formally recognized by the Simon Fraser Student Society (SFSS) as of April 2019, Greek life has slowly integrated its way into becoming a part of SFU's social and student life. There are currently two fraternities and four sororities at the university.

There have been discussions in the near future to have the Greek Representation and Interest Development (GRID) organization to finally be recognized and established as a student-led organization at SFU under the SFSS, and to expand the Greek community with more fraternities and sororities.

Once the main goals/tasks of the website were figured out and the competitive analysis was done, the next step was making an affinity diagram. My Communications Director, Ashley Wong, was overseeing my entire progress of the website so far, and I invited her for a small (and the last) brainstorming session with her; as CAC's director, since she was responsible for making sure everyone in our department is doing their assigned tasks, I thought it would be helpful from her, as someone in a higher-up position, to contribute and suggest what she wanted to see on the website too. 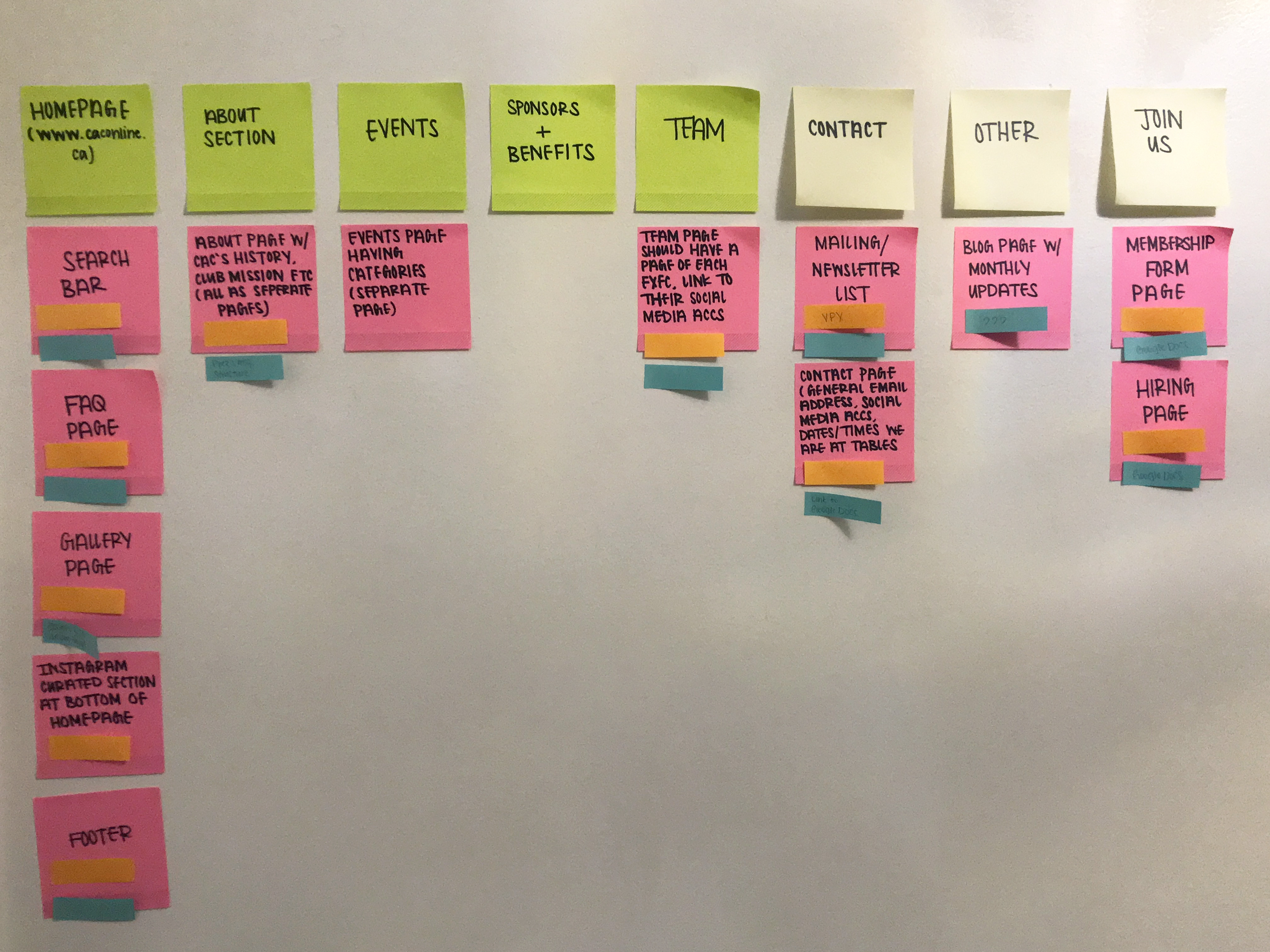 Once the affinity diagram was conducted, I went out and created a site map outlining the global navigation of the website. In the last stage of the research and ideation process, my ideal site map would contain not only the standard pages that would be found in a school club's website, but pages that would be beneficial to its visiting users, such as the About, Events, and Join Us pages. 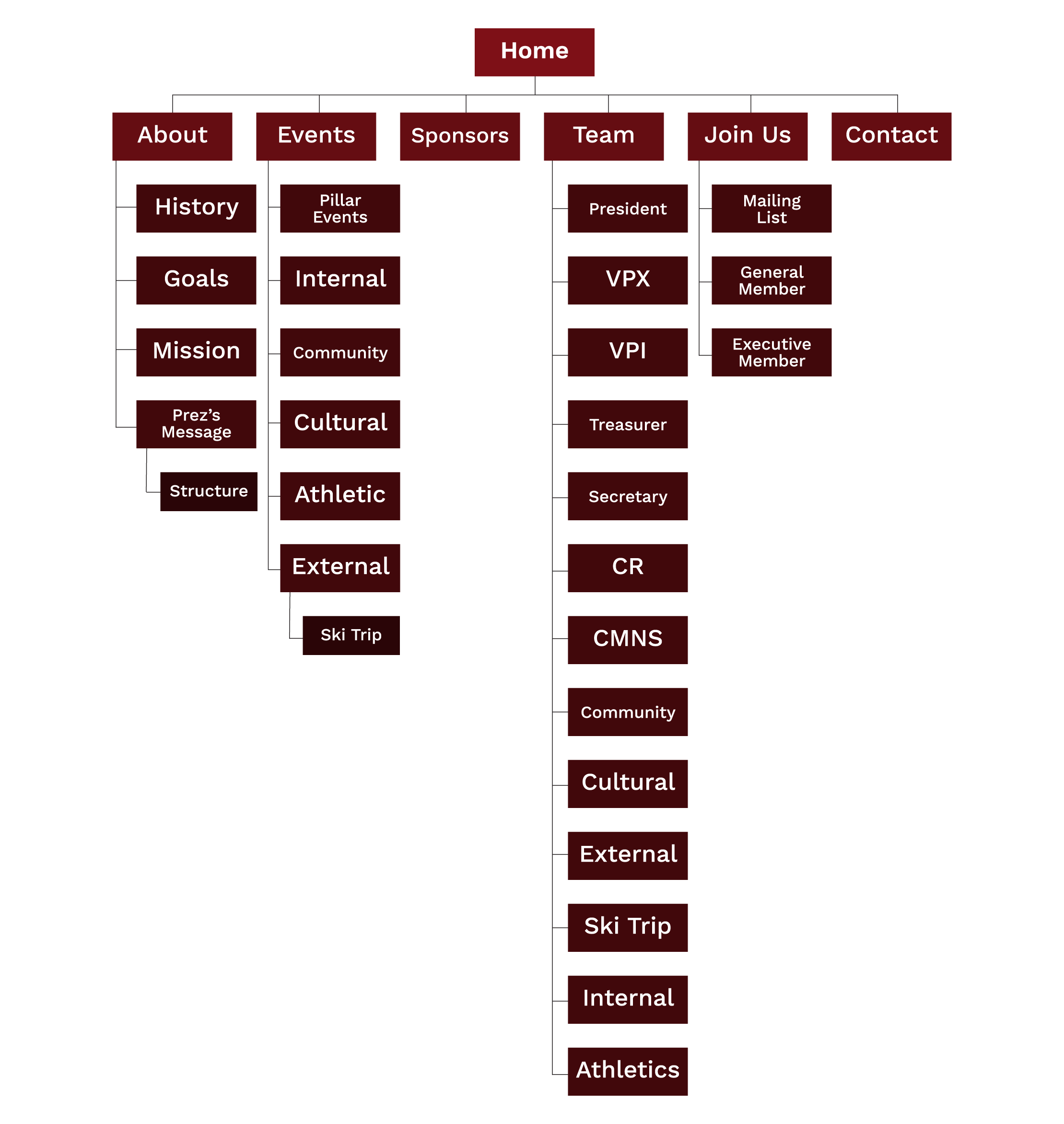 The sections on the homepage was carefully curated in a way so that even a short-term user could learn about the club in less than 10 seconds. These sections, which were "Events", "Executives", and "Join Us", are the most common aspects that members and non-members want to learn more about in CAC. For the long-term user though, these sections have buttons that will direct them to their respective page where they can find more information.

An example of a user flow on www.caconline.ca. Let's say if a user wants to check out the events that SFU CAC hosts, they would do so by being brought to Homepage > clicking on the "I'm Down" button that is part of the landing page.

Being on Instagram a lot, I noticed content creators designing their posts in a scrapbook manner - compiling a series of pictures, and then adding funny and cute gifs, memes, reaction pictures, and text. I wanted to express the personality of CAC in such a way that is reminiscent to those Instagram posts, so I re-created that style by designing a few scrapbook-esque graphics on Photoshop. 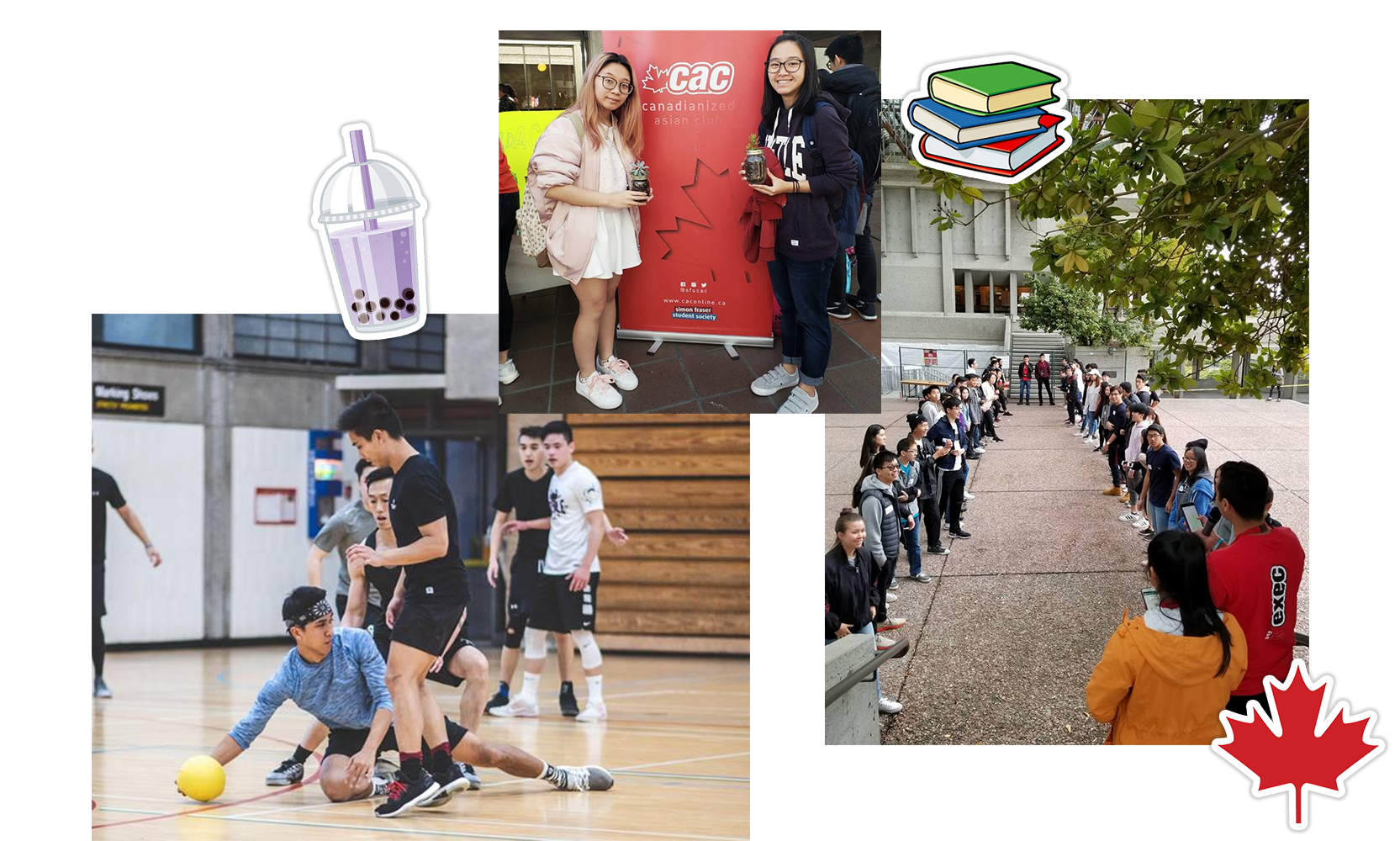 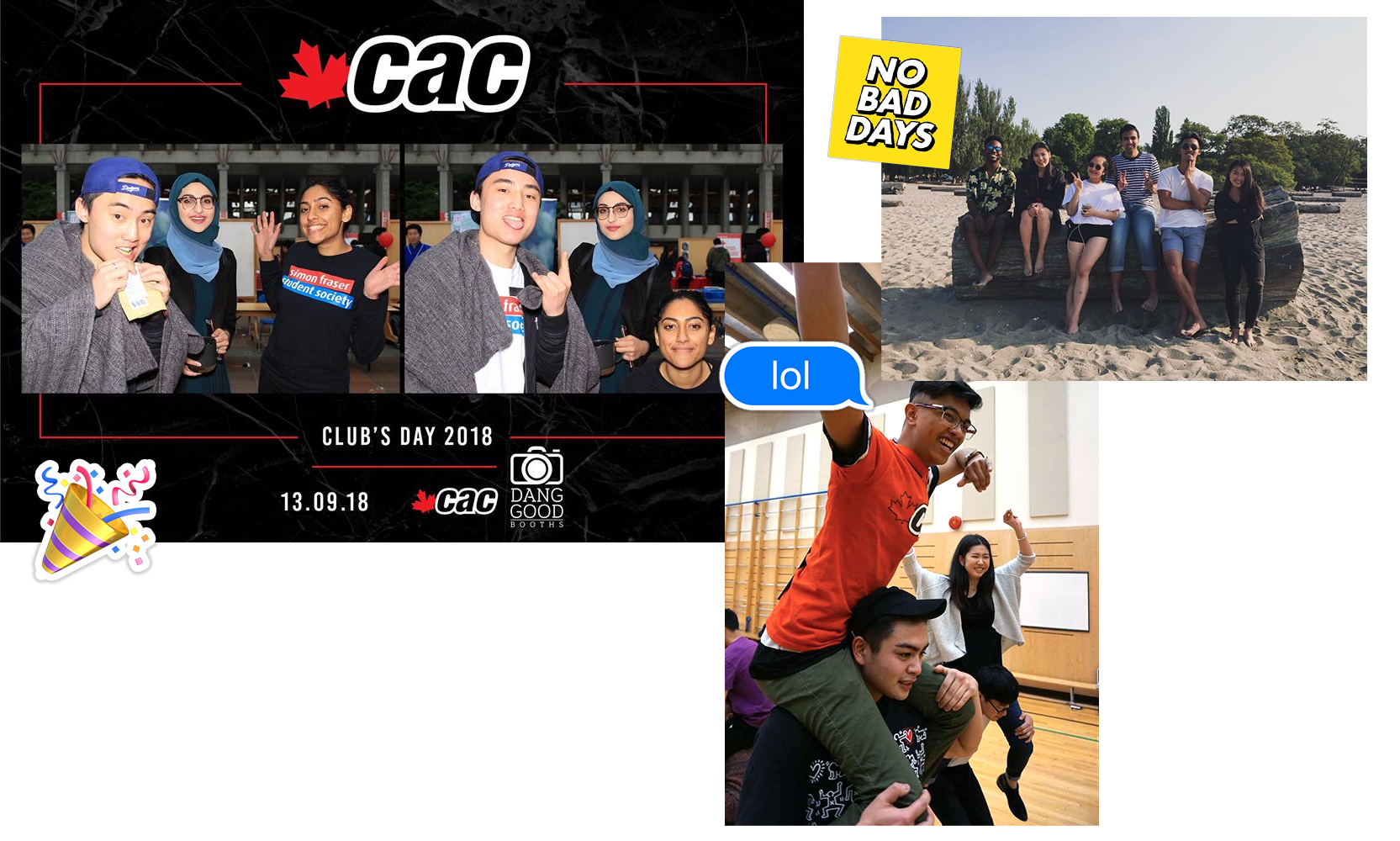 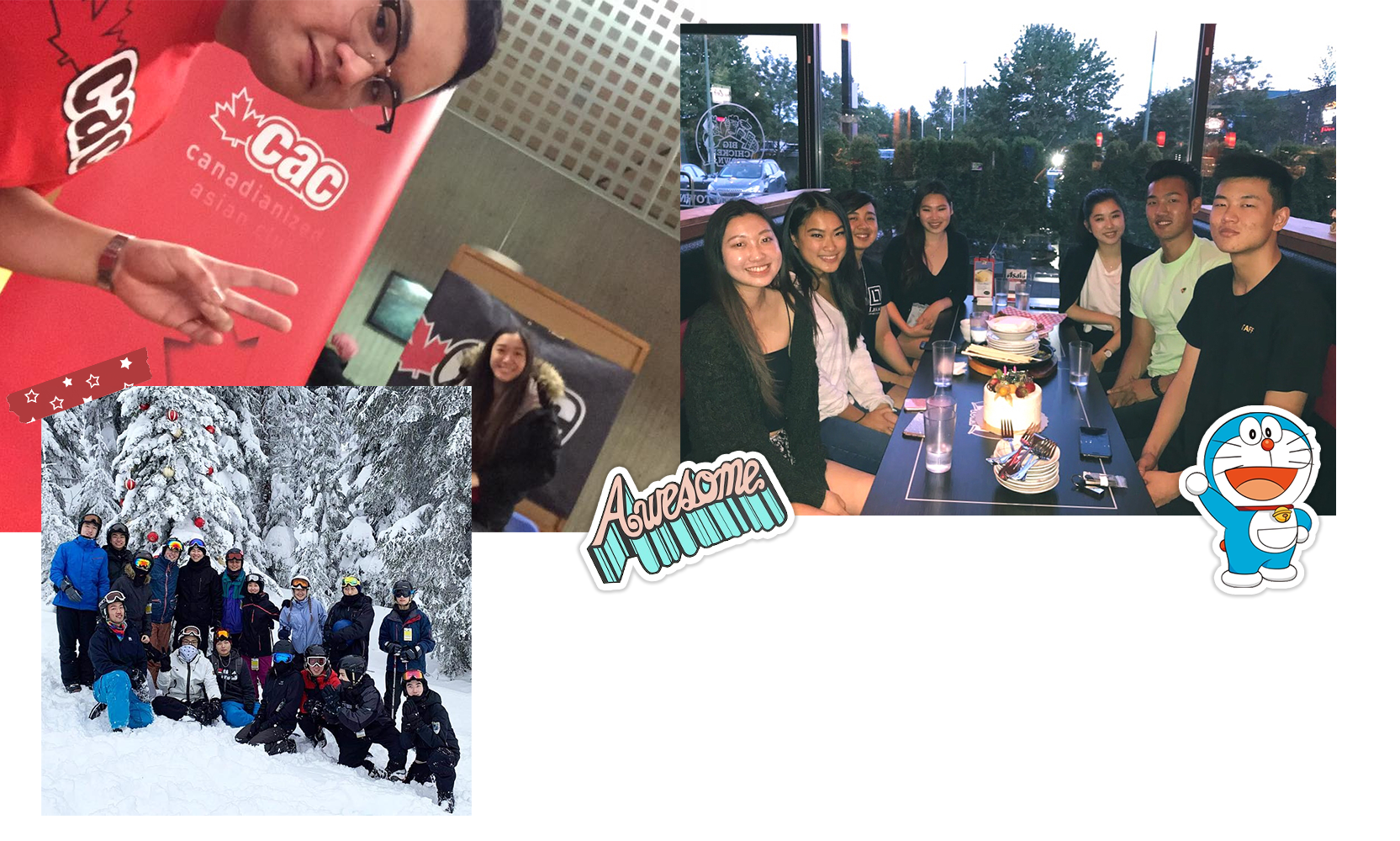 If you hover over an Executive Member's profile card, their picture changes from their CAC headshot to a candid photo of themself!

Another popular page on CAC is the Executive Council. This page is popular because the EC is composed entirely of our friends, classmates, and fellow undergraduate students of SFU. They are the ones that form CAC, make sure that the club is running in tip-top shape, and are always hosting exciting events for us. By clicking on an EC's headshot, a user can learn more about them, in terms of when and why they joined CAC, past position(s) they held, and contact them via their @caconline.ca email or on social media.

The Communications Department in CAC never hosts events, as they are the department that is in charge of all of the creative services for the club. As a result of my team's hard work into revamping CAC's website, I thought it would be neat to host the one and only Communications event in our history.

A virtual launch party was created to celebrate the launch of the newly revamped website after Reading Break ended in February 2019. Prior to the launch, I asked my Communications Director, Ashley Wong, to whip up a series of countdown graphics that was posted on our Instagram account.

I requested Ashley Wong to design these countdown graphics for our Instagram account (@sfucac). The first post on the upper left is the eventual launch of www.caconline.ca, which is a video preview of the website itself.

This was actually one of the highly prioritized tasks that was to be done when revamping the website. As the club took a rocky turn towards the last half of the 2018-2019 school year, this was never done. However, as I am still the Website Designer as of May 2019, implementing a feature where users can sign up for a membership online is in the works.

Right now, the only way you can sign up and purchase a CAC membership is by going to the Burnaby campus and visiting us at our weekly boothing tables. You can purchase a membership through Square, a credit card processing reader. Since Square also has the ability to complete transactions online, we can simply link our Square account to the website and get users to purchase their membership from there.

Although SFU CAC is much younger than its sister club, it has made its home in the SFU undergraduate community.

Many of our alumnae have started and ended their time at SFU by joining CAC - in the process, they have made their lifelong friends, found their significant other, held a position or two, and was responsible for hosting some of the best parties on campus. Many have graduated and gone off to pursue successful, professional endeavours.

It would serve as great value to start an alumni network where past members can connect with each other, share some of their fondest memories of being in CAC, and even host alumni events in the Greater Vancouver Area.

During this project, I learned some of the basics and discovered some advantageous tools to incorporate into when it came to front-end, content management system (CMS) website design and development, but I was so focused on the whole design aspect of the website that I didn't really have time to play around with any development features that could be used to improve the quality or efficiency of CAC Online. The only web development related feature I used was installing a Google Analytics plug-in, so see how much traffic poured in on the website launch, and which pages performed better.

In the future, I hope to integrate more analytics, measurement, and even some SEO tools to see how CAC Online performs and what parts of the website could be improved on more.

Again, due to the unforeseen circumstances that occurred at the latter half of the school year, a blog page with bi-weekly or monthly updates was never brought to life. However, this will most likely be replaced with the long awaited newsletter that the 2019-2020 Executive Council is slated to release by September or October 2019.